The COVID-19 pandemic in sub-Saharan Africa: surging or spared? What data reveals

The World Health Organization (WHO) declared the COVID-19 outbreak as a Public Health Emergency of International Concern on January 30, 2020. On February 28, roughly one month after the US and Europe announced their first COVID-19 cases, the first case in sub-Saharan Africa was reported in Lagos, Nigeria.

Since then the number of reported cases across all regions of the world increased, but at different speeds: 100 days after the first case in sub-Saharan Africa was reported, the region counted 100 cases per million, while all other regions with the exception of South Asia and East Asia reported a multiple of 100 cases per million, during the same time frame. As of today (this is written in late August 2020), sub-Saharan Africa has recorded only 1 million cases, while all other regions with the exception of East Asia & Pacific have recorded 1.6 million to 7 million cases. Is limited testing the only reason behind less reported COVID-19 cases in Africa? Is the region following a similar trajectory to others, but with a delayed start? Or are there other factors, unique to the region, that could explain different transmission dynamics in Africa as opposed to the rest of the world?

The aim of this blogpost is not to take positions or declare that the Africa region will be spared the worst, but rather to present data and evidence that might explain why COVID-19 transmission dynamics vary across communities, countries and regions. We will showcase a selection of  factors that potentially influence the transmission of COVID-19 in African economies, including population density, social demography, social practices, geography, but also previous experience with communicable disease outbreaks which might have led to better preparedness in some countries. We conclude with a brief case study on Rwanda, arguing that governments who implemented early preventive measures might have helped slow the transmission in their country.

Limited testing. As mentioned in our previous blogpost, it is important to note that comparing reported cases across regions can be misleading: Information on testing throughout sub-Saharan Africa is limited compared to other regions. While several European countries conducted more than 0.5 daily tests per thousand people at similar stages in the pandemic, most African countries have been testing five times less, around 0.1 per 1,000 per day. This might explain why reported COVID-19 cases are remarkably lower in sub-Saharan Africa, 100 days after the first case was reported and today.

Younger and less urban population. While limited testing is likely to contribute to different observed COVID-19 transmission dynamics across regions, regional particularities should be observed too. One of Africa’s particularities is its demographic structure: sub-Saharan Africa has the lowest median share of elderly population in the world. Less than 5% of sub-Saharan Africans are above the age of 65 years, compared to almost 20% in Europe and North America. 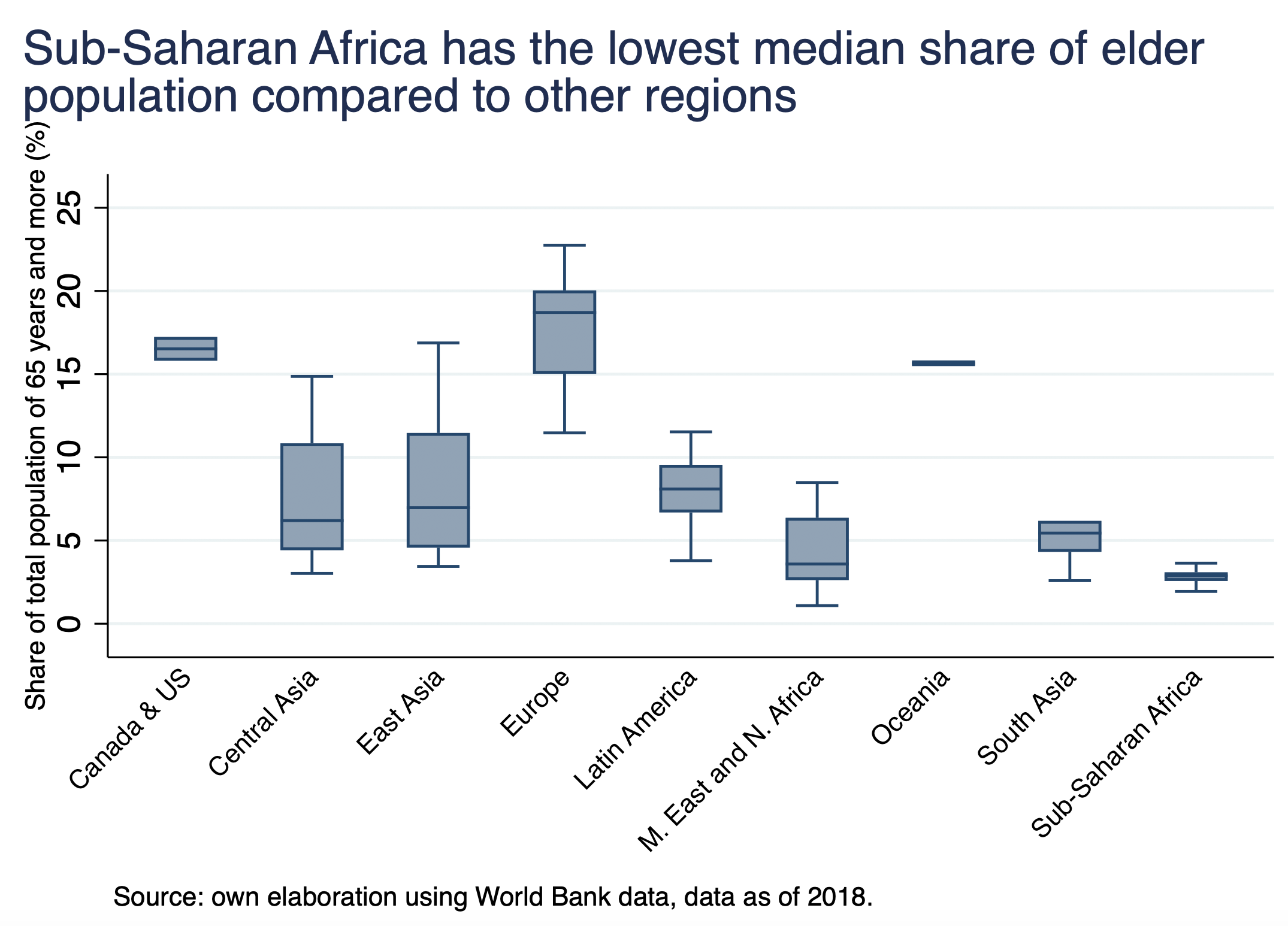 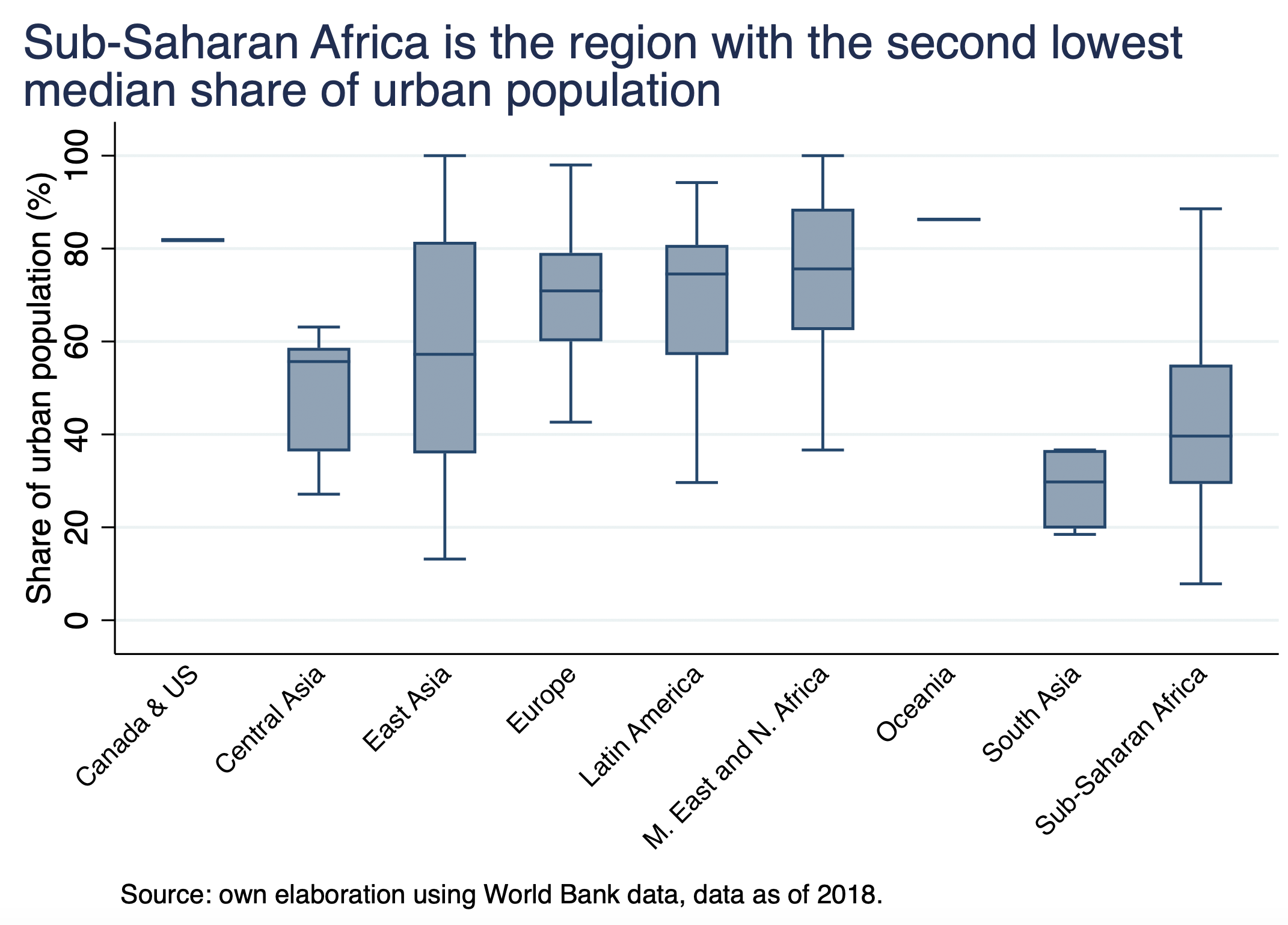 What might also play a crucial role in determining the trajectory of the virus is the share of the population living in urban areas. Sub-Saharan Africa is the region with the second lowest median share of urban population. This matters, because most COVID-19 outbreaks started in densely populated urban areas (Wuhan, New York City, Lagos). Africa’s relatively rural population may have limited the spread and severity of the virus.

Social practices and geography matter. We looked at different modes of transport, which could be another factor that might explain different COVID-19 transmission dynamics across regions. Evidence suggests a positive and strong correlation between COVID-19 fatalities and commuting patterns. The recent studies by McLaren (2020), and Knittel and Ozaltun (2020) document a large, positive association between public transportation use and deaths from COVID-19. Their results suggest that the reliance of African-Americans in the United States on public transportation explains the higher mortality rate among this community. 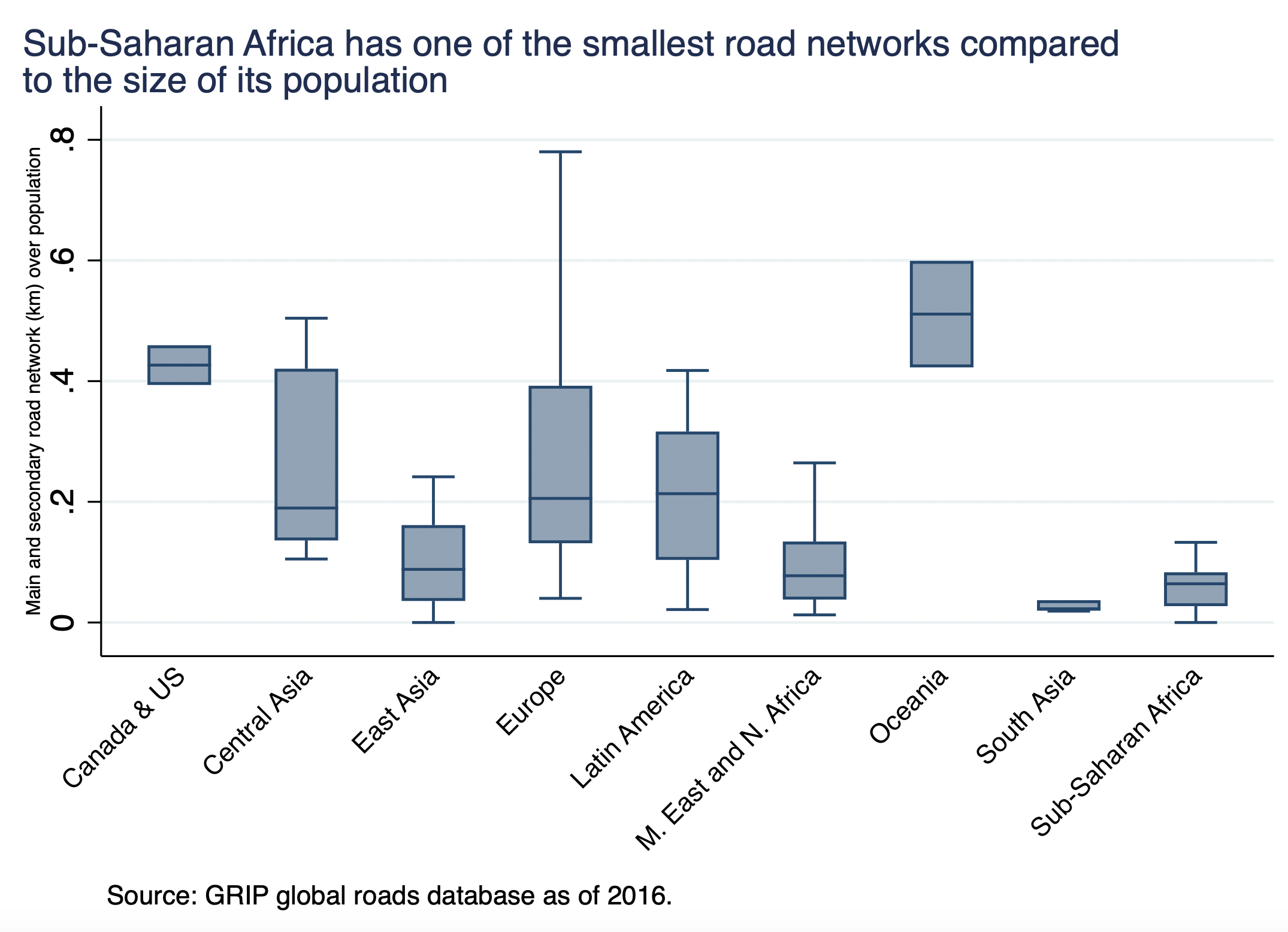 African commuting patterns may have helped limit the spread of the virus. Non-motorized transport, particularly walking, is the most dominant transport mode in African urban areas. Walking represents between 50% and 90% of daily trips, according to a World Bank study. Demand (2018) estimates that more than 75% of total daily trips made by Africa’s poor are by walking. When it comes to motorized transport, motorcycle, minibuses and motorcycle taxis are most common among Africans. The recent trends in motorized transport may also have helped contain the virus: over the past few years, the number of motorcycles has increased sharply, while public transport use (buses) in sub-Saharan African cities has been declining.

The region’s smaller road networks, as measured in kilometers of main and secondary roads over population, could also be a factor potentially influencing the spread of COVID-19. Small road networks lead to lower mobility, which was already lower than in other regions before the pandemic. Less road infrastructure makes it more difficult for people to travel from urban to rural areas and vice versa, and less traveling gives the virus less chances to spread.

Better preparedness through previous experience?  We also had a more detailed look at Africa’s previous experience with certain communicable disease outbreaks whose transmission dynamics and severity were unique to the continent, or which were earlier eradicated in other parts of the world.

Of course, different epidemics have different patterns. But having invested in preparedness and response efforts towards relatively recent disease outbreaks ranging from the Ebola virus, Tuberculosis, the Poliovirus to HIV, some African countries have rapidly adapted their technical know-how to COVID-19. South Africa recruited 30,000 community health workers, many of which were already working in projects to prevent HIV or trace contacts of people infected with tuberculosis. Community health workers who helped contain the spread of Polio are deploying their early detection know-how to take on COVID-19 detection in Nigeria. Guinea, Liberia and Sierra Leone have swiftly employed strategies from the 2014-16 Ebola outbreak, including isolating people who test positive and quarantining those who may have been in contact with the virus. While these actions might have slowed the spread of the virus, in all of the above-named countries the reported COVID-19 cases are still on the rise. Many African governments responded rapidly. Finally, the region benefited from a time lag which has allowed most African governments to implement containment measures early. South Africa and Rwanda, for example, have instituted national lockdowns before a single COVID-19 death was reported in either country. At the start of the outbreak, Ghana tested at a higher rate than South Korea. Early actions, from international travel controls and border closures to early lockdowns and mass-screenings, might have helped prevent the import of  COVID-19 cases, and could have delayed community spread.

The case of Rwanda represents valuable lessons to other countries across the world. While Rwanda’s economy has been significantly impacted by the COVID-19 pandemic with weaker domestic demand, revenue loss and a sharp decline in exports and remittances, the country benefited from two disbursements of Rapid Credit Facility (RCF) by the International Monetary Fund (IMF) in April 2020 and June 2020.

Swift actions taken by Rwandese authorities include strict border controls, curfews, lockdowns and mass screenings, but also the impulse of national production and distribution of masks and protective gear and the use of digitization tools, including contact tracing and mobile money. Looking more closely at digitalization, the government took impressive inclusive actions targeting the whole population: it supported digital tools to promote cashless payments and facilitate contact tracing; deployed robots to monitor patients while minimizing infection risk; used drones with automated megaphones to raise awareness about COVID-19, and launched an online platform to request clearance passes for domestic movements.

All of this is not to say that African leaders and citizens should relax. Even with a seemingly slower spread of infection and a lower reported death rate than most other regions, the continent’s weak health infrastructure is very susceptible to being overwhelmed. Africa remains well below likely herd immunity levels, and with no widely accessible vaccine in sight a true second wave is a real threat globally. But with misinformation and conspiracies around COVID-19 spreading around the world, through YouTube channels or in WhatsApp groups, it’s crucial to keep in mind and discuss what we know and what we don’t, using data and evidence.