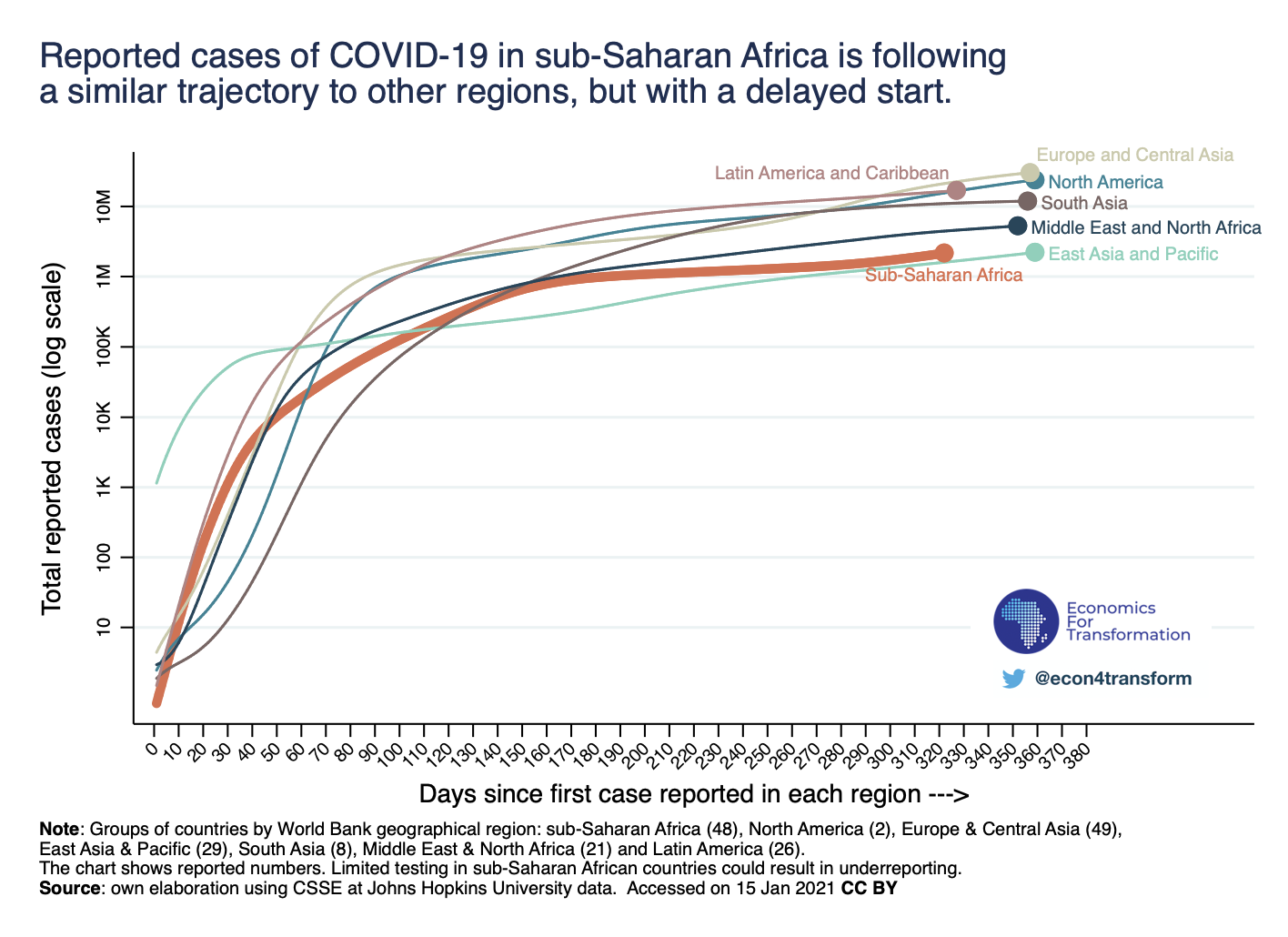 Countries in the sub-Saharan African region (SSA) recorded their first cases and deaths from COVID-19 weeks later than Asia, North America and Europe. For example, South Africa, the first country in SSA to report over 100 cases on March 18, did so one month after Italy and two weeks later than the United States.

However, the trajectory of confirmed infections is following a similar path to other regions, crossing 10,000 confirmed cases just 25 days after it crossed 1,000. And only 50 days after the first case was reported. By comparison, it took more than 50 days for Western Europe, North America, South Asia and Southeast Asia to reach this point.  Latin America has been the only region that reached this point faster than in SSA.

Nevertheless, when comparing reported cases by region we must consider at least four caveats.  First, differing scale. Regions have a different number of countries and, different population sizes, there are around 1.07 billion people in SSA compared to 1.8 billion in South Asia, for example.  Second, countries in these regions have different characteristics that can affect the spread of the disease, such as population densities, degree of urbanization and mobility. Third, countries in these regions have different health system capacities, and in particular differing COVID-19 testing capacities. Lastly, reported data can only offer a glimpse into the true spread of the disease, and do so with a time lag. Very few countries are able to test all suspected cases, and most countries in the world are massively under-testing cases due to capacity constraint. Even if full testing were being carried out, there is a time lag between exposure and testing positive, and also many reported asymptomatic cases that would not be caught by health systems if people themselves are unaware of the need to be tested. Therefore, the number of confirmed cases on any given day should be assumed to be a large underestimate of the true picture of infection in SSA. 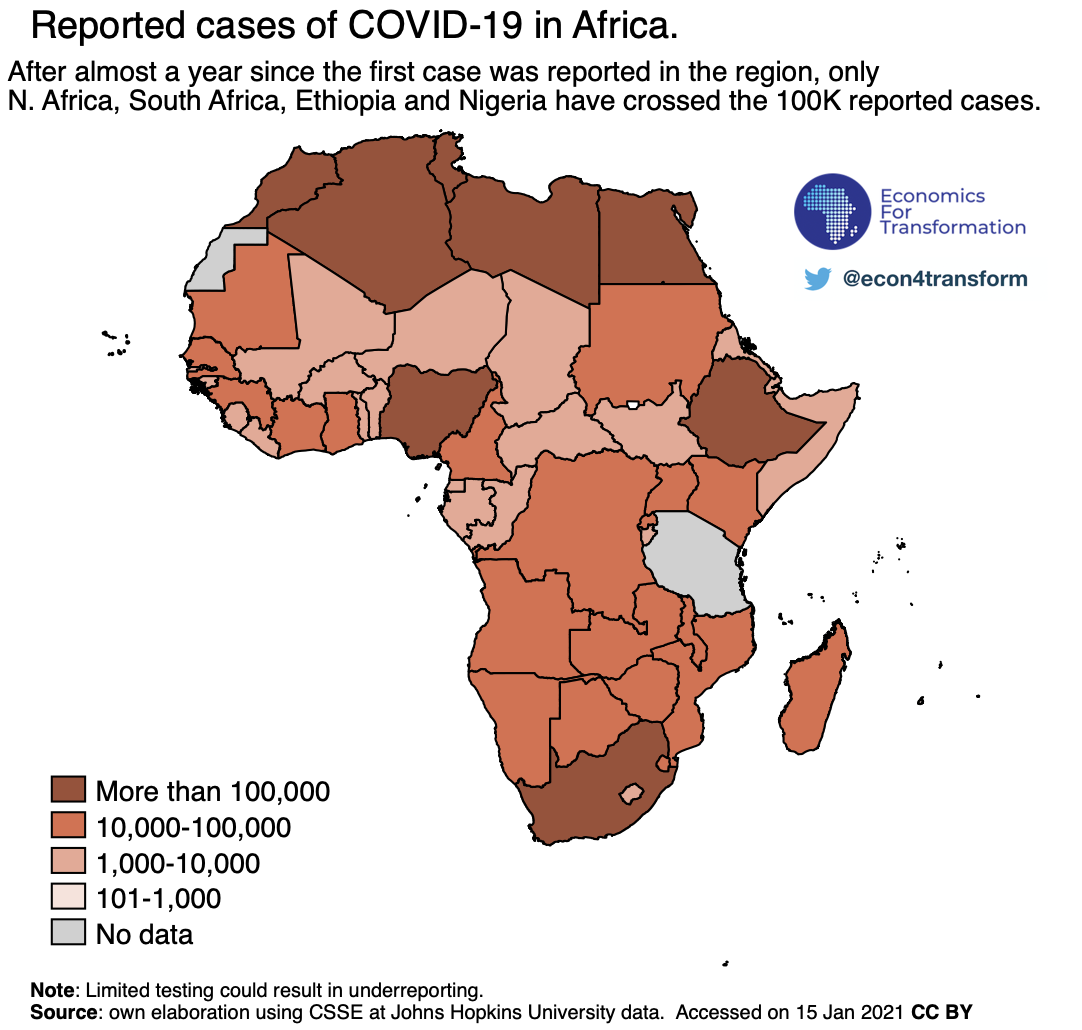 The most recent data shows that the total reported number of COVID-19 cases in sub-Saharan Africa has reached 2 million, more than half of them in South Africa. It has been almost 1 year since the first report of COVID-19 in the region on February 28, 2020.

Currently, there are 30 countries that have reported more than 5,000 cumulative cases since the first case in their countries, but only 3 of them have exceeded 100,000 reported cases.  The remaining sub-Saharan African countries have reported fewer cases or have stopped reporting cases.

Eight of the largest economies in the region, started with an exponential increase of reported cases reaching the 100 in less than a month and now have reached the number of cases in China or in South Korea. This may be due to constraints in testing capacity or could reflect some changes in the underlying rate of infection. 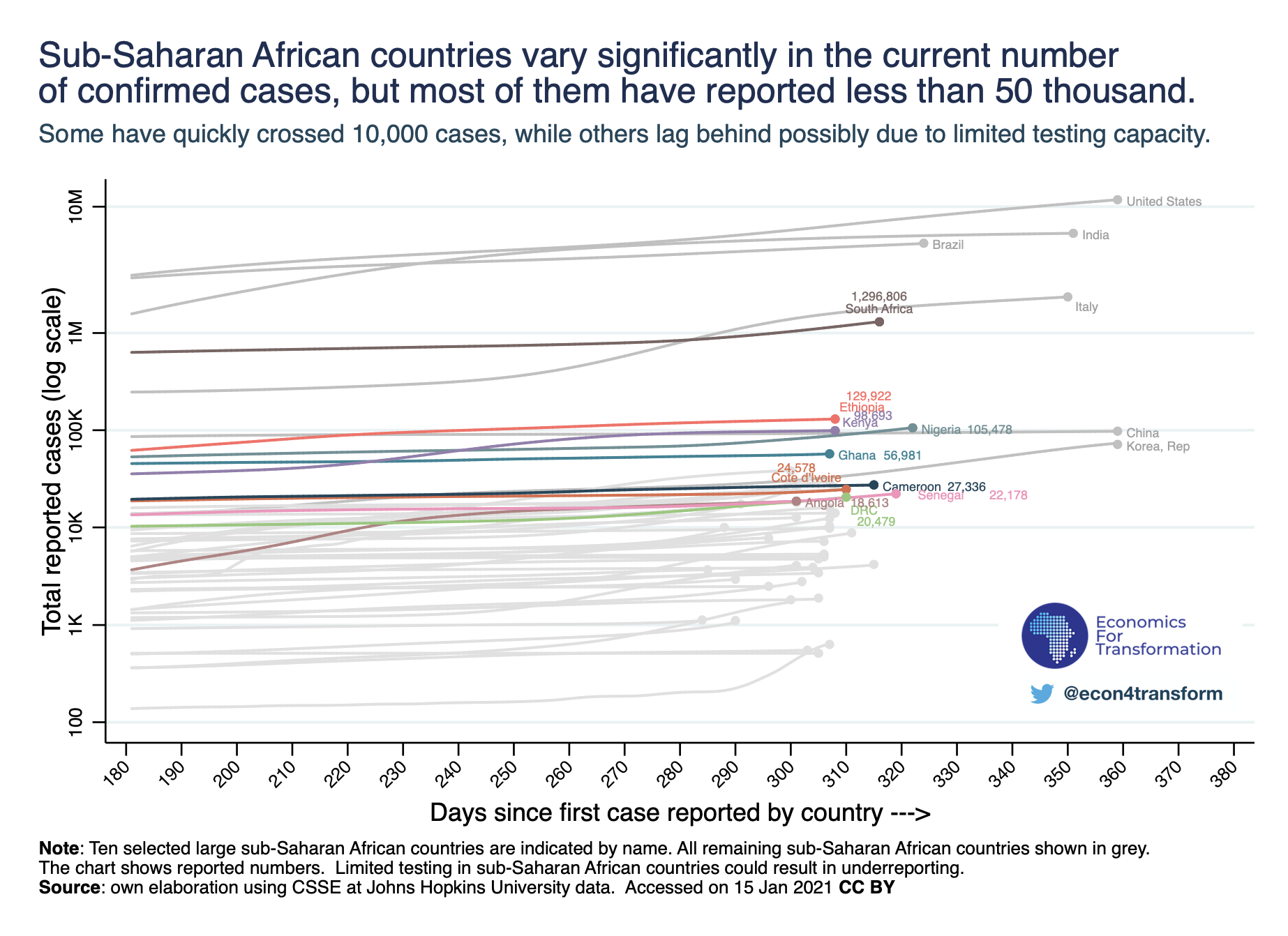 On the other hand, there are two other large sub-Saharan African economies, Ethiopia and Angola, that started reporting a few cases but now Ethiopia’s reported cases are growing at a higher rate.  However, even if we see a low number of confirmed cases in other countries, this does not imply that there is less spread of the infection, but it might be due to limited testing capacity or policies.

Data sources:  The Center for Systems Science and Engineering (CSSE) at Johns Hopkins University compiles data from different sources providing the most updated number of reported COVID-19 confirmed cases and COVID-19 related deaths in each country of the world.  The time series with the count of reported cases in each country can be found in their  Github repository  and it is updated every day.

This blog post is a work in progress and we expect future updates coming as the situation of the COVID-19 pandemic in sub-Saharan African countries evolves.