Like any other country in the world, COVID-19 has also taken its toll on Togolese citizens and our economy. While it is too early to tell the exact economic impact COVID-19 will have, there is already evidence of negative effects on most sectors of the economy. In this regard, the government has adopted a series of measures in response to COVID-19 with the aim of reviving economic activities.

The first case of COVID-19 was reported on March 6 by the Togolese authorities. Additional cases were recorded in the following days leading to the implementation of several measures to limit the spread of the virus, including the suspension of flights from other countries, the cancellation of all international events until further notice, requiring people who were recently in a high-risk country to self-isolate, the closure of the country’s borders, and prohibiting events with more than 100 people. As the virus continues to spread, the government took additional measures that include the suspension of academic activities and the closure of all schools.

According to a World Bank country report, manufacturing, commerce, construction and tourism which represent respectively 6.6%; 5.8%; 5.0% and 1.9% of GDP have been most affected so far. Also, since the closure of schools, only students from the exam classes have been authorized to get back and sit for their exams. This situation has negatively affected the performance of students as many of them were not able to complete their programs. Accordingly, we notice a significant loss of jobs in this sector mainly for teachers working in private schools or part time. A similar situation was also recorded in the tourism sector because of the closure of borders and the suspension of all kinds of events. Many hotels have temporarily closed, waiting for the opening of borders and the resumption of tourist activity.

The agricultural sector on the other hand has been less affected by the pandemic. Figure 1 shows the harmonized index of consumer prices highlighting a stabilization of crop prices during the pandemic period. This can be explained by lower COVID-19 cases recorded in rural zones due to their isolation and the less movement of people. 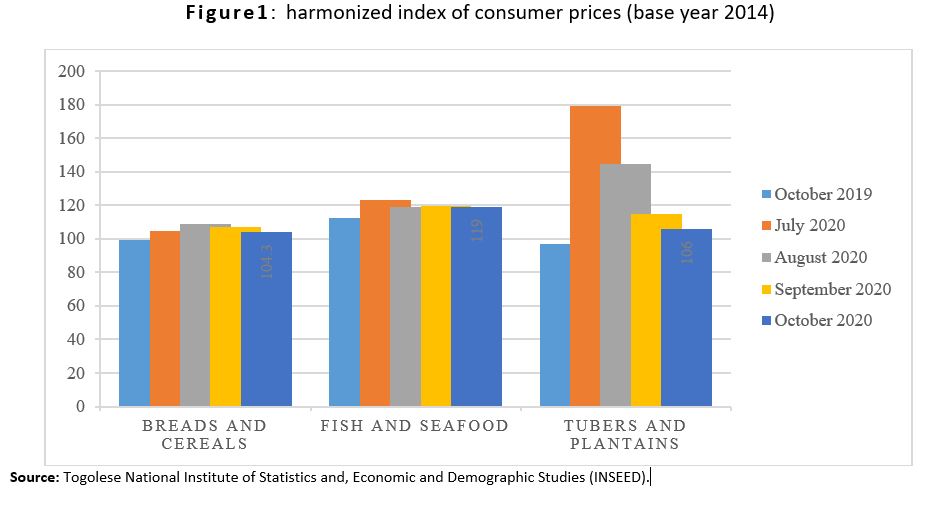 However, with the early lifting of some internal restrictions, commerce and services (except for those related to education and tourism) have experienced a rapid recovery in activities. This early lifting of certain restrictions is due to the low number of recorded COVID-19 cases.

Like most of African countries, Togo has recorded a relatively low number of cases, cumulatively not exceeding 3,000, despite an increase in testing since July 2020. Figure 2 shows the evolution of COVID-19 cases and increased testing in the Republic of Togo. 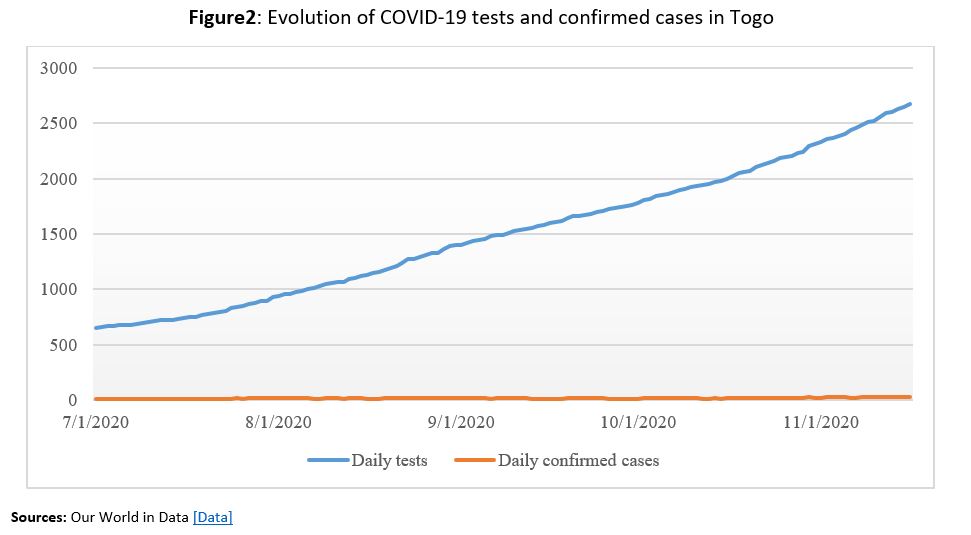 Why the economy suffers, despite the comparatively low number of recorded COVID-19 cases.

Despite the comparatively low number of cases, the COVID-19 crisis is expected to severely affect the Togolese economy through three key domestic and external channels: The first channel is linked to containment measures, such as travel restrictions and border closures that are expected to cause domestic shortfalls in both supply and demand. Secondly, global trade disruptions are expected to lower Togo’s exports and reduce activity at its main port. Finally, tighter global financial conditions are expected to make it harder for Togo to finance its deficit and service debt.

The closure of borders and the implementation of restrictions have affected employment and created some social distortion. In terms of employment, the most affected groups are recent graduates and new small entrepreneurs that did not get the opportunity to enter the market before the outbreak of the pandemic.

How the government supports the economy and its citizens.

To overcome the COVID-19 shock and help the economy to recover, various economic and social measures were adopted by the Togolese government: the government has launched a cash transfer program, called NOVISSI, for the most vulnerable. An amount of CFA 20,000, or USD 37 per person per month was distributed to the most vulnerable for a period of three months. In addition, a program of free water and electricity supply has been introduced for the same three-month period.

According to a  World Bank report on the economic situation in Togo,  COVID-19 could lower economic growth from 5.3% in 2019 to 1% in 2020. To mitigate these risks, the report’s authors call on the government to lift structural constraints on the private sector development that plays a key role in the national development plan and in reviving the economy. They also suggested to facilitate access to finance, improving the quality and reducing the costs of access to electricity and telecommunications services, reducing the burden of taxation on businesses and strengthening human capital.

In line with the above recommendations, the government set up a series of economic measures that include tax reductions for small and medium companies and developed a national Response Plan estimated at CFA 400 billion (USD 665 million). In this sense, the National Social Security Fund (Caisse Nationale de Securité Sociale, CNSS) has taken special measures in favor of the private sector. For SMEs, a 75% discount will be applied to surcharges for late payment of social contributions. Additionally, the Togolese Revenue Office (Office Togolais des Recettes, OTR), has put in place a series of accompanying measures that include the reduction of recovery actions, flexibility in the management of Outstanding Recoveries (RAR) and the suspension of tax audits for companies. In addition, tax exemptions for the most vulnerable sectors and rearrangements of the tax payment schedule for affected companies were adopted.

Togo benefits from IMF funds, but receives less than its peers in the region.

Nonetheless, the promises of donors in terms of public debt relief for low income countries point to a less pessimistic outlook. Togo has benefited from a set of measures from the International Monetary Fund (IMF): Togo obtained FCFA 78 billion in immediate disbursement, which is FCFA 58 billion more than the sum initially promised by the fund for the year 2020. Further, the West African Development Bank (Banque Ouest Africaine de Développement, BOAD) has released an envelope of FCFA 15 billion to support Togo in its effort to revive the economy. The World Bank Group has also approved USD 70 million to help Togo cope with the COVID-19 health crisis in its socioeconomic recovery phase. This funding includes a donation of USD 35 million and a credit of USD 35 million.

However, compared to other countries in the region, Togo has received less COVID-19 financial assistance and debt service relief from the IMF. Figure 3 and 4 compare disbursements received by countries from the IMF and reveal that the Financial Assistance and Debt Service Relief is unevenly distributed among countries. This is usually linked to countries’ needs and economic activity level (as can be observed in figure 3 showing a strong relationship between the received amounts and GDP). Among the twelve selected countries, only three have received an amount higher than the average (Ghana, Côte d’Ivoire and Senegal that have benefited respectively 1,000; 886.2 and 442.1 USD millions). We notice in figure 3 that Togo is among the countries that have received a comparatively small amount.

Beyond the negative effects the pandemic might have on the Togolese economy, COVID-19 could represent an opportunity to further develop domestic production. In fact, the response and support measures put in place by the Togolese government and supported by community institutions and the technical and financial partners, point to a direction of increased public expenditure in favor of investment, particularly in the fields of health, support for the purchasing power of vulnerable groups and support for companies most affected by the crisis.

Furthermore, this crisis can be favorable for companies that rely on local value chain production. Despite being affected by the general economic downturn, these companies could increase their profit by gaining market share compared to companies that import products from abroad. For instance, the scarcity of protective surgical masks at the international level has forced a number of Togolese consumers to turn to artisanal masks made on site. However, the success of these companies will depend on their capacity to supply the production gap before the recovery of the economy at the global level. This requires an increase in national production capacity by strengthening human capital, facilitating access to finance for local businesses, and setting up support programs for new entrepreneurs.