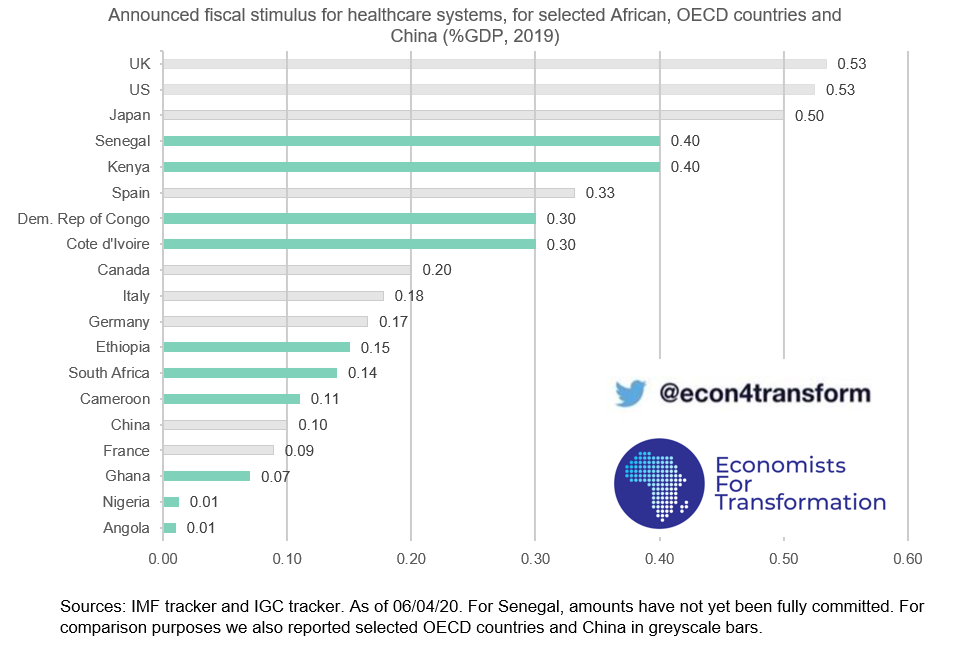 in The selected African countries in the above charts represent the 8 largest and most affected (highest number of COVID-19 reported cases) economies across sub-Saharan Africa plus Côte d’Ivoire and Senegal to increase the representation of francophone countries.

These selected African economies have reached levels of economic restrictions comparable to the largest OECD economies and China, but unlike richer countries, few African governments can match this stringency with similarly ambitious fiscal responses.

The  stringency levels collected by the Blavatnik School of Government (2020) ranged from a stringency score of 75% in Angola to 99% in South Africa; compared to 90% in Italy, Belgium and the Netherlands, as of April 24, 2020.

Interestingly, while the fiscal stimulus differences between our selected sub-Saharan African economies and OECD countries are huge in terms of total fiscal stimulus as percentage of GDP, both groups of selected countries spend an average of around 0.2% of GDP to bolster their healthcare systems – a comparable amount in relative terms.

Senegal is a particular case of interest; it has reported 3,932 cases and 47 deaths as of June 4, 2020. The government has implemented strict containment measures including school closures, a curfew and limits on inter-regional travel. These, and the sudden stop of travel and tourism, lower remittances and declining export demand, have already had a significant economic impact.

To mitigate these effects and to finance additional health and fiscal measures, the Senegalese government has set up a national solidarity fund of 7% of GDP or $1.6bn, financed by a mix of donor contributions, the national budget and voluntary donations by the private sector. If implemented, this will be the second largest fiscal response to COVID-19, in relative terms, in sub-Saharan Africa.

On the health side, the IMF approved emergency financing of US $442 million to support the government to respond to the crisis, of which $107 million, or 0.5% of GDP.

Looking beyond fiscal measures, some countries have taken innovative policy actions beyond fiscal stimulus measures that don’t require additional funds: Kenya, Cameroon and Ghana are reducing the cost of digital financial transactions by waiving mobile money charges for transactions to disincentivize the use of cash and facilitate cash transfers.

Cash transfers remain the most widely used intervention by governments across the world.  However, according to the IGC and the IMF only five out of our 10 selected African countries have implemented cash transfers so far. These include Kenya, Cameroon, Côte d’Ivoire, South Africa and Ghana. Outside of the selected group of countries, Togo has in just one week launched a direct cash-transfer program consisting of bi-weekly electronic payments of $ 21 (35% of minimum wage) and $ 17.5 (30% of minimum wage) for women and men, respectively. Anyone who is a resident or Togolese national, 18 years old, is in possession of a voting card or a national identity card and can justify the loss of income due to the lockdown, i.e. works for the informal sector, is eligible. This program will cost the country about 0.37% of GDP for 3 months and will be financed through the COVID-19 response fund.[1]

It is promising that some African countries are already coming up with innovative fiscal and social response measures to COVID-19. Without fiscal help, “millions of South Africans in the informal economy and without employment are struggling to survive”, President Ramaphosa said. This is probably true for the whole continent.

This blog post is a work in progress and we expect future updates coming as the situation of the COVID-19 pandemic in Sub-Saharan African countries evolves.